One of the ongoing discussions in youth sports involves the matter of trophies and awards for participation.

One of the ongoing discussions in youth sports involves the matter of participation trophies and awards – trophies awarded for participation in a sport or event. There are valid arguments for each side of the issue as this blog post from Sports Signup reveals. Which side of the debate do you find yourself on? Perhaps you will read something that will sway your feelings one way or another.

Many coaches and parents feel that children should not receive awards at the end of the season simply for showing up to the games and practices. Those sorts of rewards should be reserved for those kids who make extraordinary contributions to the team. In their eyes, handing out awards for participation cheapens the contributions of those kids who go above and beyond.

On the other side of the debate are the parents and coaches who feel that such participation awards and trophies are not harmful in any way. Their argument is that they encourage young players to feel like they are part of a team. This can be just the push that a reluctant child needs to try a new sport or to show up for practices each day. Other types of trophies and awards can be handed out to those players who made a big contribution to the team as well.

In this blog post on the Outside the Lines website, opposing views on the hotly debated topic of automatic sports trophies and awards that are received

by a child simply for participating are presented. Where do you stand on the topic? Do you see validity in both sides of the argument?

This article debates a question that often plagues coaches, particularly when it comes to games with younger children who might be experiencing team sports for the first time. Should all children receive trophies and awards is the question that sparks a great deal of debate. Read it and decide for yourself.

Personally, I think there is a place for Participation Awards – it’s not an All or Nothing argument. Youth athletes, particularly those just starting in a sport, should be encouraged and rewarded for going to practice and at least making an effort. And they should be encouraged to play and act like a team – Isn’t that what team sports are all about? And if the team wins or fails, they do so together, and giving them a pat on the back with a participation trophy for giving it their best is very appropriate.

As they get older, and they recognize that trophies are special and need to be earned by trying harder and being better, then participation trophies should give way to championship trophies and individual awards for MVP, most improved, etc. We should give kids some credit – they do know the difference. But even when they are older, participation trophies are very appropriate for division, regional, and state tournaments. Just making it to the “next level” is well worth recognizing.

I remember clearly when I was growing up, all of the award medals and trophies that we won being clearly displayed where the whole world could see them in the family room. There were none that were shoved into a closet or into the attic and “forgotten.” After reading Veronica Romualdez’s article for eHow entitled “Ways to Display Sports Medals,” I started really wondering about trophies and medals.

I mean I don’t remember seeing all of those trophies at my friends houses, although we were on some of the same teams growing up. Does that mean that my family was the only one who showcased every single trophy and accomplishment? I hope not because I do the same with my kids sports trophies, and my own from my childhood as a matter of fact.

Should I display trophies and medals for my kids? Or should I leave that to them? I think many people do at least for a little while. I mean what do they win them for? Not to be thrown into a box and shoved into a closet. I am proud of my kids sports accomplishments and will buy hundreds of shadow boxes to put them in and display if it comes to that. How about you? Do you hide your kids trophies or proudly put them on display for the world to see?

More often than not award medals and trophies get thrown in a closet, where they sit and collect dust until someone remembers them. If you don’t want that to happen to your sports medals and trophies, Veronica Romualdez has compiled a list of ways that you can have your trophies showcased for all to see.

Our war veterans are a crucial part of our history and many of the veterans from World War II are passing away daily due to age without receiving the award medals they should have been presented with more than 65 years ago.

Historians like Jerry Barksdale that specialize in World War II biographies, are working hard to preserve the legacies left behind by these heroes.  During his research, Barksdale uncovered four veterans from the Athens, Alabama area who were awarded honors during their service in World War II, yet had not been presented with the actual award medals.  He also uncovered distinctions they should have been awarded yet had not.

The four WWII veterans to receive award medals for various honors for their service including the Legion of Honor medal issued by the French government.  The medal was instituted by Napoleon Bonaparte and is awarded “to recognize the special contribution and act of bravery while fighting for the liberation of our country…”  The men all aided the French Resistance during the 1940’s.

Although it is unclear why the men are only now being awarded the many medals they were to be awarded, Barksdale says he feels it is about time.  He believes the men deserve recognition for their efforts on behalf of civil liberation and now is better than never.

Read more about these four incredible men and their achievements in this article.

Charles Wright of Conway was finally handed his award medals for his service in the Iwo Jima campaign during World War II.  Researchers found Wright had been awarded the honors for the two medals, yet after 70 years he still had not received the actual medals.  Thecabin.net reports on this on this oversight that was finally rectified.

Master Sgt. Darrell Hanning of Houlton, Maine, was awarded the prestigious Legion of Merit award earlier last week by Col. Hamilton D. Richards, commander of the 120th Regional Support Group Bangor. Hanning retired from the Army National Guard this past November after 21 years of dedicated service to the U.S. Army. The Legion of Merit is one of the most coveted award medals in the U.S. It was established by an act of Congress in 1942 and it is presented to members of the armed forces for exceptional meritorious conduct in the performance of outstanding service and achievement.

Hanning joined the U.S. Army on October 8th, 1990. He completed his basic training and advanced individual training at Fort Sill, Oklahoma. His first duty assignment was in Wildfleken, Germany. Over the last two decades he has worked in a variety of different sectors. He spent the last four years spearheading logistics, deploying and redeploying soldiers and their equipment in support of Operations Enduring Freedom and Iraqi Freedom.

The Legion of Merit is one of only two United States military neck decoration award medals, the other being the Medal of Honor. It is the sixth in the order of importance of U.S. millitary awards. Hanning lives in Houlton, Maine with his wife and children.

Cheerleading at sports events started on college campuses in the 1880’s. These early cheerleaders were people who were part of the audience and worked to get everyone cheering together. It was not until 1898 that University of Minnesota student Johnny Campbell stood in front of the audience and directed their cheers. This made him the first modern cheerleader and thus began modern organized cheerleading.

Today nearly every high school in America has a structured program for cheerleading seaspm to lead the cheers of the crowds at football, basketball and other major school sporting events. Compared to the early cheerleaders, modern cheerleading has become more of an athletic feat – and a competitive event as well.

And with any competitive athletic event, there are always awards and trophies that go to the winners and the participants. QuickTrophy makes lots of different cheerleading trophies and awards to recognize the winning teams and to commemorate the cheerleading season.

For the 2nd year in a row, QuickTrophy has worked with the organizers of the Marquette Marathon to help produce the Marquette Marathon medals. Last year we created the medals in-house by sublimating their race logo onto 2″ discs and adhering them to bright gold medallions and attaching blue ribbons for the marathon finishers and gold ribbons for the half marathon finishers.

This year we worked with a foundry to create die cast medals. They are thicker, heavier, and present a strong contrast with last year’s medals. Overall, they turned out very, very nice. If you have questions about our sports medals for sale, please call customer service at QuickTrophy, and we will gladly help you.

The Marquette Marathon follows a bike trail around town and back through the downtown area and along the lake shore before looping around Presque Isle for the final 2 miles. It is a relatively flat, fast course with awesome scenery (3 light houses) and to top it off, it is a qualifying race for the Boston Marathon. 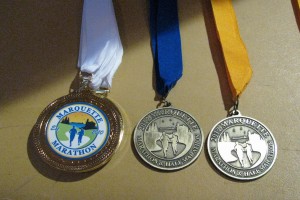 And then there is QuickTrophy and the people who work here, the day to day events, the challenges of building a company, and Marquette, the lovely place we live, huddled along the shore of Lake Superior in Upper Michigan.

I guess the thing to do is just start and see where it goes.