QuickTrophy has recently introduced what may be the most beautiful crystal award disc golf trophy ever. It is a piece of optic crystal 4″ high, 2″ wide and 1″ thick with a full color, digitally printed picture of a disc golf basket. The image is printed on the back of the crystal so you look through the glass to see the picture. This gives the award a great depth. Your personalized engraving is printed as part of the image. our digital printer uses a UV ink curing process that has an extremely high-definition, photo quality that is simply stunning.

Truly, this crystal disc golf trophy is more a piece of art deserving of a place on the home mantle! 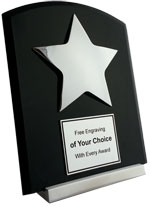 Why do we hand out employee recognition awards? Are they a waste of money? Do we get any return on our investment?

Your employees work hard – but usually there are a few or one in particular that excel in their accomplishments. Maybe they pushed hard on a project to make sure it came in ahead of schedule, or they worked longer hours to make sure the system upgrade went smoothly, or maybe they helped to energize the team when things looked grim. Whatever the reason, when you publicly recognize an employee in front of their peers with custom corporate awards, the effect is amazing! Their pride generates a positive wave in the workplace and other employees are positively affected by it. They too, are encouraged to put forth the extra effort. The atmosphere is changed and charged up in a positive way resulting in a better work environment for all.

When you get right down to it, publicly recognizing your employees for a job well done and commemorating it with achievement awards – no matter how simple – results in a big payoff for the investment made. A waste of money? No way – in a big way!

Our favorite tournament of the season, Wimbledon is the oldest and best-known tennis championship in the modern competitive circuit.

Our favorite tournament of the season, Wimbledon is the oldest and best-known tennis championship in the modern competitive circuit. It’s the oldest tournament in the world, which is why it’s officially called just The Championships – when it started, back in 1877, it was the only one! The grass courts of Wimbledon have made or broken the careers of some of the greatest athletes in tennis, lending the action a significance no true fan can ignore.

For the ramp up to Wimbledon, Sports Illustrated has delivered a handy crib sheet of players to watch this year. In the woman’s competition, our favorite up-and-coming player has to be Li Na:

One of the most exciting things about Li is that she’s proved to be an all-court player, having won the French Open, made the Australian Open final twice and advanced to the Wimbledon quarterfinals twice. But the 31-year-old comes into Wimbledon in a state of flux. She started the year with a bang and looked to be back on track to challenge at the French Open after getting to the final in Stuttgart, Germany, but she lost to an in-form Mattek-Sands in the second round. A deep run at Wimbledon is doable.

While the French Open has concluded, we feel it’s worth taking a moment from our Wimbledon coverage to discuss the tennis great from whom the Coupe Suzanne Lenglen takes its name. The first truly famous female tennis player, Suzanne “La Divine” Lenglen won thirty-one titles in the course of her career. Among Lenglen’s accomplishments is the fastest Wimbledon victory in the record books – she defeated her 1922 singles final opponent in just twenty-six minutes, while recovering from a devastating pertussis infection.

Lenglen died too soon, of complications from leukemia, in July of 1938.

While we have no Wimbledon Trophy replicas at QuickTrophy, we do have some very nice metal cup trophies that can be used for your tennis tournament – whether it’s called the Championships or just the Family Games.

As much as we love golf, we can’t help but focus on the US Open Trophy.

The current trophy dates to 1947, when it was first presented by the USGA. This model is very similar to an earlier U.S. Open trophy that dated to the first tournament in 1895, but that original was destroyed in a fire in 1946. So the current model is a replacement model.

The U.S. Open Trophy is permanently housed in the USGA Museum and Arnold Palmer Center for Golf History in Far Hills, N.J. Each U.S. Open champion receives a replica of the trophy to keep permanently.

It may be no Cup of the Musketeers, but the US Open Trophy is a fine trophy wit a clean, classic design, and little ornamentation to clutter its fine lines. Perhaps the name suits it in that respect.

We don’t offer any replicas of the US Open trophy, at QuickTrophy, but we do offer many fine golf trophies that can serve very well as a perpetual trophy for your annual golf tournament.

Every four years, the best athletes from all over the world converge into the biggest sporting event. All eyes are on these athletes as they compete and give their best for their countries and for themselves. When they emerge victorious, their families, friends and supporters from their countries celebrate their success and herald them as modern heroes. Everybody has a great time, and the winners make their mark in the legacy of their chosen field or sport. They make a name for themselves and make their nations proud.

What happens the Olympians that don’t medal? Nobody ever seems to notice the athletes who have failed to put themselves on the Olympic pedestal, especially when the event is all done and people move on with their lives. Sure, they can compete in another four years’ time, but what happens until then? This should not be a question for the more popular athletes, like those who have reached celebrity status – especially those who come from America. Making money would be as easy as posing for some commercial or advocating for a sponsor, a brand, a product. It all seems like they are having the time of their lives.

For the non-champions and those who have not had even a single endorsement, there is no other way to go but to return to their normal lives, whatever that may entail. It may be an office job, running a business, going back to school, or being with one’s family. People often assume that athletes do better in life, generally speaking, because of their intense training and the character values that they have built in the process. Confidence, diligence, discipline, perseverance, and hard work, to name a few. Many would be shocked to learn that this is not true for every athlete. In fact, many of the post-Olympian participants find it quite hard to resume their previous engagements or careers. A recent study shows evidence that athletes may be challenged a whole lot when making the shift back to regular life. Read more about this study from Jena McGregor’s article.