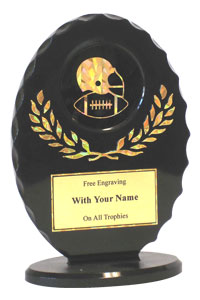 What is the lifespan of a trophy or award style? It seems like bobble-heads came and went during a 2-3 year period around 2005 or so. Some resin awards were impossible to keep in stock for a while and now you can’t give them away. At the same time the old standby – the figurine on a marble base – has been around for decades and is still one of the most sought after trophies. What evolutionary law of popularity determines what’s hot and what’s not and for how long?

We used to sell hundreds of simple black acrylic awards with a matching black and gold holographic decal depicting various sport themes. Shown in the picture is one of the football acrylic awards. The awards came in two sizes. Their popularity waxed and waned with the collective preferences of the coaches and team mom’s across the country. Well, rather than try to figure out the laws of pop culture, it is best to just ride the waves and know when it is time to pull the plug. Time to discount and make room for new stuff. So get the football acrylic awards while we still have them!