Anyone who has ever been to a hockey game has probably seen a Zamboni Ice Resurfacing Machine – usually referred to as just a Zamboni. Over 10,000 of these units have been sold world wide to help keep the surface of ice skating and hockey rinks smooth. Invented by Frank Zamboni in Los Angeles in 1949, these awesome units have been built and sold by the Zamboni Company ever since.

And if you can’t own a Zamboni, maybe at least you can sponsor one. QuickTrophy has teamed up with Northern Lights Arena in Alpena, Michigan to sponsor one of their Zamboni Ice Resurfacing machines: The QuickTrophy Zamboni. How cool is that? 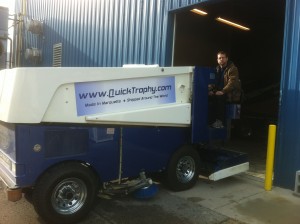