Sometimes called “tennis for old people”, Pickleball is one of the fastest growing sports in the country. It is extremely popular with leagues playing in all 50 states and over 15,000 pickleball courts in the US alone. Because the game is slower paced than tennis, it is very popular in areas where retirement communities have formed, particularly in the southern states.

Pickleball started back in the 1960’s in Bainbridge Island, Washington. The name of the game apparently has ties to the selection of crew teams for rowing. When putting together crew teams, you try to fill the boat with people similar in size and strength to balance out the boat. In the process of filling the boats, you inevitably have the people who didn’t fit in – they form “the pickle boat”. So, apparently, anyone can play pickleball, not just star athletes. Undoubtedly, this is one of the reasons pickleball has become such a popular sport. 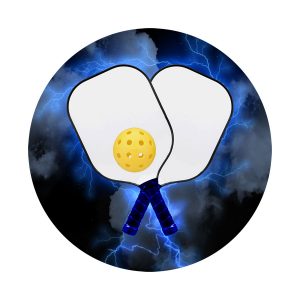 As with tennis, you can have pickleball matches of singles or doubles of men, women, or mixed doubles. Also similar to tennis, you can play pickleball indoors or outdoors. And, as with tennis matches, pickleball trophies, medals, and awards are often given to the winning players and teams. Pickleball games are short – you only play to 10 points, or win by 2 points if the score is tied at or over 10. But because of the equipment used, the action of the game is slower than tennis. This also adds to the universal attraction to the game by people of all athletic abilities – even those of us destined to be in “the pickle boat”.