Pinewood Derby is a Cub Scout racing event. Cub scouts create small cars, usually from kits that contain a piece of pine (hence the name, pinewood), 4 plastic tires, and 4 nails to use as the axles. The size of the wood is regulated to be no larger than 7 inches long and 2 3/4 inches wide. The finished car can weigh no more than 5 ounces. Local troops may have variations on these specifications.

Started in the 1950’s in California, the Pinewood Derby was originally an alternative to soap box derby races for younger, cub scouts. Like soap box cars, pinewood cars use only gravity for power, but they are smaller and much easier to build. Plus, they run on an indoor track so the events can be held during the winter months, while much of the outdoors is buried under snow. Over the years, the popularity of soap box derby’s have waned, probably with the availability of soap boxes, while the popularity of pinewood derby’s have actually increased!

The popularity of Pinewood Derby has resulted in spin-off events such as Powder Puff Derby for girls, and the Raingutter Regatta for carved sail boats.

QuickTrophy makes trophies and awards for pinewood derby. We have everything from ribbons to medals t 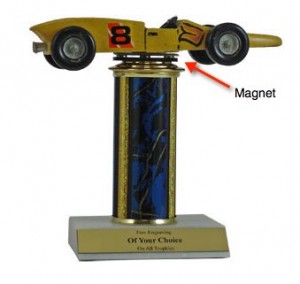 Pinewood Derby has been around for over 60 years and it looks like it will be around for a long time to come. Keep the memories alive for another 60 years with commemorative awards.