In April of 2011, QuickTrophy built the world record tallest trophy. The trophy stands at 22 feet, 6 1/2 inches tall! It was recognized by Guinness World Records in March of 2012 and it is currently housed at the Superior Dome on the campus of Northern M 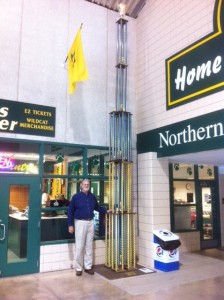 The man standing next to the trophy is Chuck Bavis, a sales representative for JDS Industries. What makes this picture interesting is that Chuck is a 7 foot, former basketball player! As you can see in the picture, he would need to duck to get through the door next to him! This gives you some idea of how large the trophy is.

If you are ever in Marquette, Michigan, it is worth a stop to see! Stop in at “The Dome” and see the World Record Tallest Trophy.